Home > De-Stressing > What is Reflexology? 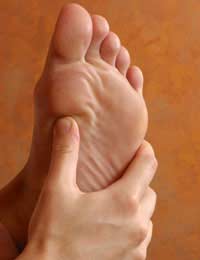 Reflexology is the holistic practice of applying pressure to certain points of the feet, hands, and even sometimes the ears in order to have a beneficial health effect on a certain part of the body. These points correspond with a system of zones, so therefore reflexology is sometimes known as zone therapy. There are reflexology maps of the feet, hands, and ears, which tell you what part of the anatomy will receive a corresponding therapeutic effect when that point is massaged. For example, massaging the bottom centre of the big toe is supposed to stimulate the pituitary gland. The pituitary gland is often known as "The Master Gland" because it can affect metabolism, blood pressure, sexuality, reproduction, and other vital functions.

It is believed that reflexology works by unblocking an imbalance in the body that often follows illness, stress, injury, or disease. Using reflexology to return the balance to the body can help restore and maintain the body's natural equilibrium and promote healing.

Reflexology has been practiced for thousands of years. Archeologists have found evidence that it was used by the Egyptians as far back as 2330 BCE, the Chinese as far back as 2704 BCE, and the Japanese as far back as 690 CD. Reflexology did not become embraced by Western world until the early 19th century. Drs. William H. Fitzgerald and Edwin Bowers introduced it to the United States in 1913. Eunice D. Ingham was a nurse and physiotherapist that helped further develop the practice during the 30's and 40's. She mapped the body into reflexes and the practice was renamed from zone therapy to reflexology at this time.

It is believe that by rubbing certain parts of the foot or hand, you stimulate the nerve endings, which unblock the natural energy field, and helps heal the corresponding part of the body.

Going in for Treatment

The first time you visit a reflexologist, you should expect to answer some questions about your general overall health. It is also acceptable for you to ask him or her questions, such as how long he or she has been in practice and if he or she belongs to any professional reflexology associations.

Using Prayer when Coping with Stress

What to Look for in a Massage Chair